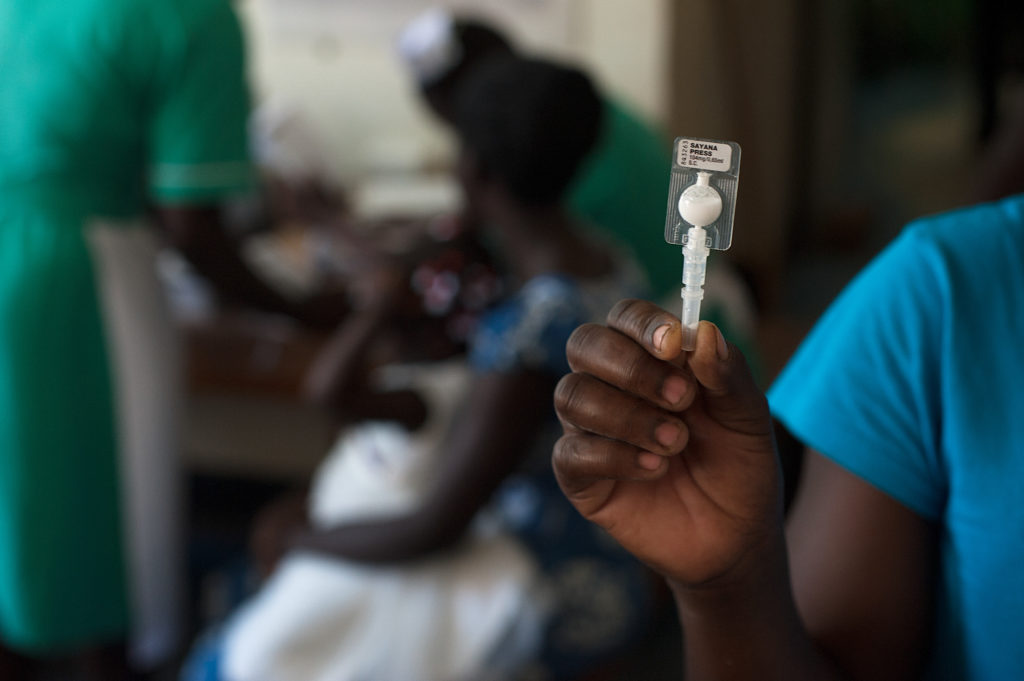 As part of the Imagine2030 campaign we want to show that innovation is not just something for the future. Medical advances being made right now will shape how we fight diseases of poverty in the future, and are delivering changes every day. It will be these advances, and the organisations behind them, that will bring us closer to our goal: an end of diseases of poverty by 2030.

We shift our final focus of the campaign to maternal health and family planning ahead of World Contraception Day on September 26. Our partners at PATH are working on a new contraceptive method that can increase contraceptive access and choice for the women that need it the most.

Subcutaneous depot medroxyprogesterone acetate (DMPA-SC) is a new, innovative injectable that opens up contraceptive access and choice to women at the “last mile” in low-income countries and promotes women’s empowerment and autonomy. Sayana® Press, the DMPA-SC brand product currently available, combines the contraceptive drug and needle in the Uniject™ injection system.* This “all-in-one” contraceptive is small, light, and easy to use, making it especially suitable for community-based distribution—and for women to administer themselves through self-injection.

This simple but revolutionary contraceptive is the culmination of a 30-year journey. PATH originally developed the Uniject injection system in the 1990s as a way for minimally trained health workers to give lifesaving medicines and to keep syringes and needles from being reused, avoiding risk of transmitting bloodborne pathogens. PATH then licensed the technology to Becton Dickinson (BD), which began working with pharmaceutical companies to package medicines in the Uniject. Years later, Pfizer developed a new, lower-dose formulation of DMPA that could be delivered subcutaneously—just under the skin—instead of intramuscularly. In 2014, a price agreement between the Bill & Melinda Gates Foundation, Pfizer Inc., and the Children’s Investment Fund Foundation helped galvanize momentum for rollout of the product and ensured women in the world’s poorest countries would have access to Sayana Press. Recently, the price was reduced to US$0.85 per dose for qualified purchasers such as ministries of health, USAID, and UNFPA.

Working closely with ministries of health and local partners, PATH coordinated the first introductions of the currently available DMPA-SC product, Sayana Press, in Burkina Faso, Niger, Senegal, and Uganda starting in 2014. By early 2016, all four countries began moving to include the product at scale in their national family planning programs. Today, DMPA-SC is available in at least 15 FP2020 countries and more than 1 million doses have been delivered to women around the world.

Making a difference in the lives of women, adolescent girls, and communities

Wherever it’s been introduced, DMPA-SC has helped increase access for women and adolescents. Before DMPA-SC, injectables could only be given using a standard vial and syringe and were most often administered by medical workers. Long distances to clinics, long waits for service, and occasional stockouts of syringes meant too many women went home without receiving the family planning method of their choice. DMPA-SC, on the other hand, moves family planning provision closer to women. Trained lay health workers can inject family planning clients whenever and wherever it is convenient, even in the privacy of their homes.

The unique design of Sayana Press lends itself to easy and safe self-injection. The United Kingdom and several European Union countries approved self-injection with Sayana Press in 2015, and an increasing number of countries in other parts of the world have also approved the practice. And the World Health Organization has recommended self-injection of subcutaneous injectable contraceptives in settings where women have access to training and support.

By advancing the long-term, sustainable availability of DMPA-SC as part of a broad contraceptive method mix, global partners have the potential to reach millions of women with an unmet need for family planning. To achieve this goal, countries are working together to share program implementation evidence and inform new country experiences and transitions.

Uganda in particular has been a leader in this space. Over the last year, delegations from Benin, Burkina Faso, Niger, Nigeria, Senegal, and many more countries have traveled to Uganda to observe the self-injection research studies and community-based distribution programs, meet with Village Health Team members (community health workers), and exchange information with governmental and nongovernmental partners regarding introduction and scale-up. During each visit, the country teams developed action plans for strengthening the quality of DMPA-SC programming and implementation in their own countries, informed by evidence and experience.

Building on research conducted in both Uganda and Senegal, PATH and implementing partners in Uganda are now assessing best practices for self-injection program design across multiple channels and plan to share results with other countries interested in introducing and scaling up self-injection.

*The information in this article is specific to Sayana Press, the currently available DMPA-SC brand product in FP2020 countries. Additional DMPA-SC products may be available in the future. Sayana Press is a registered trademark of Pfizer Inc. Uniject is a trademark of BD.

As part of the Imagine2030 campaign we want to show that innovation is not just something for the future. Medical advances being made right now will shape how we fight diseases of poverty in the future, and are delivering changes every day. It will be these advances, and the organisations behind them, that will bring us closer to our goal: an end of diseases of poverty by 2030.

We shift our final focus of the campaign to maternal health and family planning ahead of World Contraception Day on September 26. Our partners at FHI360 are working on understanding the real issues that affect women when it comes to contraceptive use, and how best to use data to shape research projects and new products to respond to these issues. This article originally appeared on the Contraceptive Health Technology Exchange

Contraceptive product development efforts, to date, have largely been premised on the notion that if we build it, they will come. Primary attention has been paid to making products that work, with the assumption that if women want to avoid pregnancy, they will use them. While the desire to avoid pregnancy is an extremely powerful motivator, it is not enough. For many women, the fear of contraceptive side effects or the challenge associated with accessing and using contraceptives is greater than the burden of another pregnancy.

Some argue that to improve uptake and continuation rates, we need to improve provider counseling around contraceptive side effects and address socio-cultural barriers, such as inequitable gender norms, that prevent women from using contraceptives. These efforts—while essential—are still insufficient. Even the most informed and empowered women can have unintended pregnancies when they don’t have access to acceptablecontraceptives—methods that meet their particular needs in their particular life stage and context.

As researchers, how do we shift the model of contraceptive development to focus first on what users want from an ideal contraceptive? From large population surveys, such as the country-level Demographic and Health Surveys (DHS), we already have some insight into what they don’t want. In those surveys, non-contraceptive users who say they don’t want to become pregnant are asked why they aren’t using a method. Their most frequent response is “side effects and health concerns.”  Qualitative studies have explored in more detail the particular side effects and other concerns that contribute to non-use.

Knowing what is potentially unacceptable to users is a great start, but it doesn’t tell us everything. We also need to know what users desire from their contraceptives. What characteristics could make them not only easier, but maybe even desirable to use?  What non-contraceptive benefits might they confer? Soliciting this kind of information is not easy. Responses to hypothetical questions about whether one would use a new method are not especially reliable. The correlation between what people say they are going to do and what they actually do is notoriously weak.

Product preference questions are especially challenging within the time and space constraints of a quantitative survey. Questions usually have a set of pre-coded response options which inevitably do not encompass the entirety of perspectives; moreover, standardized product descriptions can limit understanding. Translation of complex or unfamiliar concepts into the local language of the study population also presents challenges. How does one describe “hormone” in Mossi, the predominant local language in Burkina Faso? Also, surveys can run the risk of social desirability bias where the respondent gives an answer she thinks the interviewer wants to hear or is the “right” answer.

But… by asking a lot of different questions in different ways, we can begin to see patterns. By using different data collection methods, we can triangulate our findings. As part of the Contraceptive Technology Innovation Initiative, we did just that in a recently completed study in Uganda and Burkina Faso. The study assessed potential user preferences for six, long-acting methods currently in various stages of development or introduction:  a new single-rod implant, a biodegradable implant, a longer-acting injectable, a method of non-surgical permanent contraception, a new copper intrauterine device (IUD), and the levonorgestrel intra-uterine system (LNG-IUS).

To start, we added a set of 11 questions to one round of the Performance Monitoring and Accountability 2020 (PMA2020) survey in each country. Women were asked what method characteristics were most important to them when choosing a contraceptive, how long they wanted their method to last, and whether they would consider using any of these six methods, if available. The great thing about the PMA2020 platform is that it offers a nationally representative sample of women, so we can have some reassurance that findings are generalizable to the broader population.

To supplement the survey data, we held focus group discussions with women and men and conducted in-depth interviews with family planning providers.  We explored user preferences, attitudes, and decision-making drivers related to the six methods specifically and to contraceptive use generally.

In all, more than 5,000 women responded to the PMA2020 survey questions and over 500 women, men, and providers participated in focus groups and interviews. We learned, for example, that women in Uganda and Burkina Faso are particularly concerned about irregular and heavy menstrual bleeding caused by some contraceptives. While some respondents said they would use a method that induces amenorrhea (absence of bleeding), others were concerned that stopping menstruation would have negative health effects.

Some women said they wouldn’t want a method inserted into the uterus, while providers noted that many of their clients would not use a method that delayed their ability to get pregnant after discontinuing use. Across several lines of inquiry, we found that the biggest complaints about existing methods were directly related to what makes many of them work – contraceptive steroids. We will need to identify new, non-hormonal contraceptive targets to increase chances of future product method acceptability.

In the end, our research confirmed the urgency for a broader range of family planning methods to meet widely varying needs and desires of women worldwide – a range that includes new choices with fewer side effects to enhance acceptability and reduce health-related fears that deter use. There is nothing hypothetical about that.